Starting with a list of about a dozen twitter accounts in Birmingham’s Food Scene, supplied by our friends @PopUpDosa, we identify who is most interested in the scene, then look at who else they follow in order to map the scene more fully.  This results in some very interesting maps with potential marketing implications for those involved.

There’s a bit of a bias towards street food and savoury food, so I’d be interested to hear how I could extend the list, for example by adding @Suhaav.

Using our “seed list” of about a dozen food related accounts from Birmingham, we identified 133 individuals, businesses or organisations with a very high interest in Birmingham’s Food Scene. They range from the media side, such as Edible Brum Magazine (@EdibleBrum) and restaurant critic Paul Fulford (@PaulFulford), to baker and food evangelist Tom Baker (@loafonline), to blogger  and man about town (well, I see him at many events) Cy(ber) Birmingham (@cybrum), plus many more.

Click each image to see a larger version, or you can see all the details in this PDFs – which you can also search for names!

This map shows the accounts which follow at least 10 of the “seeds”. They represent people and organisations with a keen interest in Birmingham’s Food Scene.  Click for a bigger image, or you can see more detail in this PDF 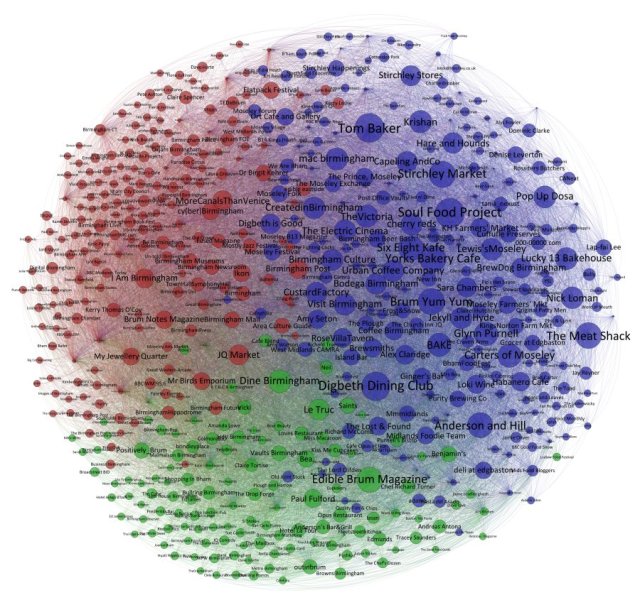 This shows an unfiltered view of accounts most likely to be followed by our “Highly Interested” group. Click for a bigger image or see full details in a pdf.

I’ve coloured the accounts using a clustering method, which uses information on who follows who to automatically divided them into three groups: red, green and blue. The red group at the top left contains many accounts which are generally related to Birmingham, but not so related to food. The other two groups are mainly food related, and you can spot features such as the cluster of hotels, pubs and city centre venues at the bottom left (in green) and accounts related to Stirchley at the top in Blue.

As we’re interested in the Food Scene, I’m going to cut out most of the red group. I’ll save a handful of “red” accounts which I know to be food related:

Why are these accounts in the red group (and, for that matter, why are accounts like “Created in Birmingham” in the blue)? Some examples which might help explain: Dr Birgit Kehrer runs @changekitchen which has strong voluntary sector links, this has pulled the account over into the red group. Similarly, @edibleeastside , “An arts led initiative to transform a derelict site into a vibrant and contemporary urban garden…” has strong arts scene links. Note, that this doesn’t necessarily mean they don’t have stong food scene links, though this could be investigated separately.  Depending on how these accounts want to position themselves,  they may want to build more links with Birmingham’s Food Scene.

Another answer is that there is no perfect clustering, there are lots of ways to categorise accounts, and the automated process won’t necessarily agree with one individual’s view. However, I think you’ll agree it’s done pretty well!

Focussing in on the Food Scene

Dropping the majority of accounts in the “red” group, we re-organise and re-cluster the accounts specifically related to food. Let’s have a look. Click for a bigger image, or for a perfectly scalable one, which will look lovely when printed, download the  pdf.

Birmingham’s Food Scene Mapped. Click for more details, or  see it all in a zoomable format (pdf).

So… what does this tell us about Birmingham’s Food Scene on Twitter?

Well, it looks like we’ve identified many of the key players. If we want to publicise something to the “scene” we’d do well to talk to those who are most followed (largest nodes). There are a number of other “Social Network Analysis metrics” which more accurately identify influence,  and when I run these, accounts such as Claire Tortise (@FredaPR_consult), a specialist food/drink communications consultancy, stand out more clearly.

There’s quite a high degree of geographical clustering, for example, Stirchley accounts can be seen in the top left with many Kings Heath nodes close by and Moseley nodes towards the bottom left. Extrapolating from the  Twitter evidence, we could contend that in Brum, many people are “hyper-locally” guided in their food choices, which is a fancy way of saying they want to eat somewhere close by.

Noticeably distance from other Moseley nodes  is Carters of Moseley  (@cartersmoseley) which is placed adjacent to another “fine dining” account, that of Glynn Purnell (@yummy_brummie).  Which seems sensible. We could interpret this as “people interested in fine dining are willing to travel”.

I’d be very interested in hearing your comments and interpretation of this map, either via twitter @AndyPryke (follow me for more similar investigations) or in the comments section below. I’m also open to suggestions for other sectors to map, and, of course, I’m available for commercial work in the area too (which comes with a lot more detail).

You are welcome to reproduce these images as long as you reference either @AndyPryke or include a link to this blog post. I’d love to hear if you do. Mapping Birmingham’s Food Scene by Andy Pryke is licensed under a Creative Commons Attribution-NoDerivs 3.0 Unported License.